What are you doing? Me? I am transcribing death certificates for the state of Missouri. A lot of my dad's relatives lived and/or died there, so I have a soft spot for this project.

If you would like to be involved, here is the link: Missouri Archives evolunteers where you can register to transcribe records. This year we are recording more information, which is why there are so many left to do. Please consider helping.

BTW. I suggest using Chrome when transcribing rather than Firefox. It handles it better.

I have been looking for some time for a marriage announcement and a record for my relative, Joseph Chinn and his wife, Vera Todd Ellis. I finally found this in the Lexington (Kentucky) Leader during last year's research trip to the Lexington Public Library. Tells me a lot, eh? No.

First of all, I can't find a marriage record for them. Not in Cincinnati, and have never found one in Kentucky or Indiana, either. This is it. And I wonder how long it took them to drive up to Cedar Point in 1913. I think it highly unlikely they married anywhere other than that tri-state area. Back to the research log. 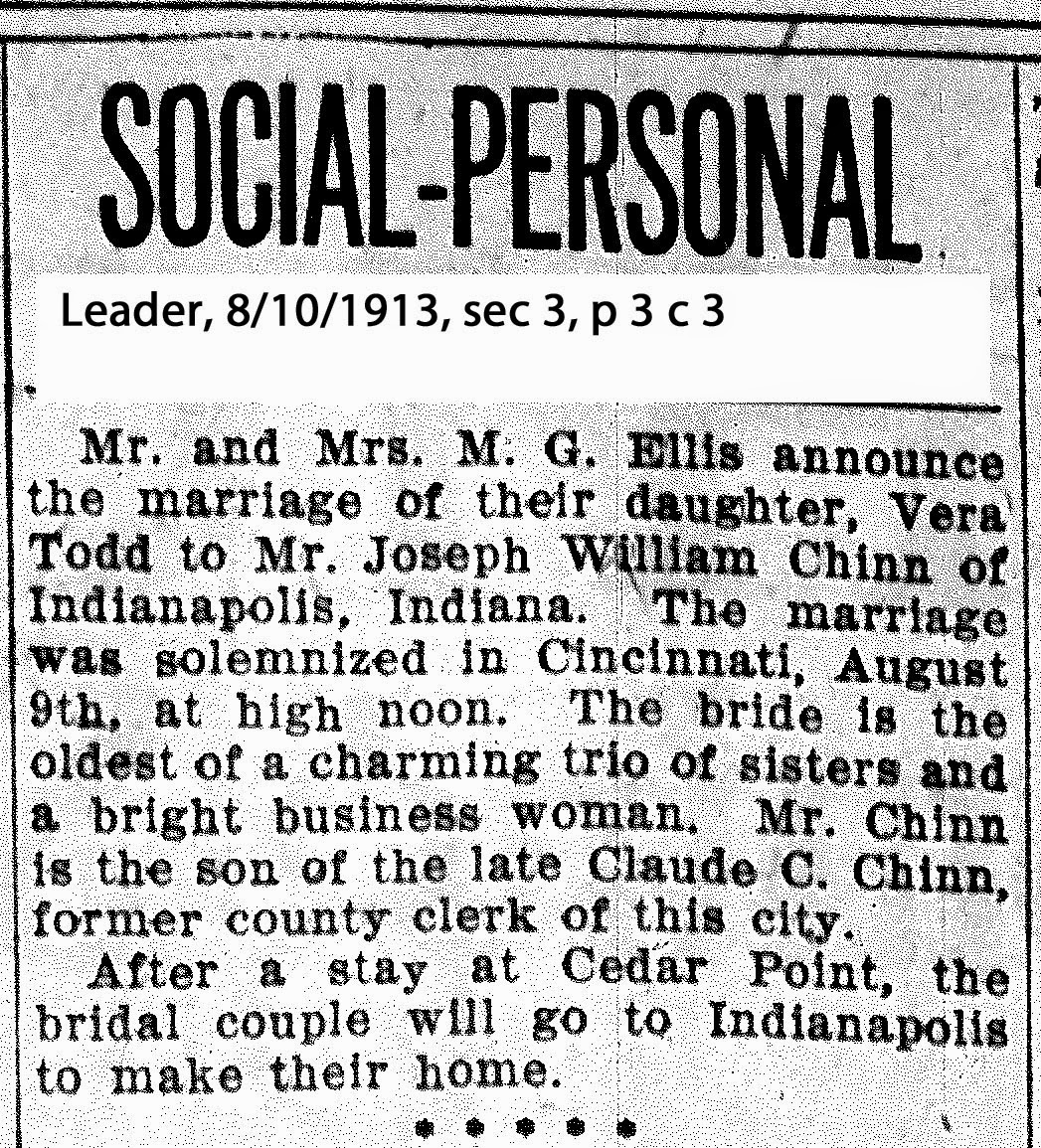 We had a fabulous Saturday, here in Cookeville. It was sunny and brisk, just what I expect for January in mid Tennessee. It was also opening day at our local animal shelter's new facility. It is truly awesome and such a long time in coming. It has space for 150 dogs and 50 cats. It has an adorable cat playroom and the kennels are built so the dogs can go in and out through their own doggy doors. It was hard to not walk out with a new addition.

This week is a hectic one here in our household. Hope DH and I are up to it!

Copyright 2010-2015, ACK for Gene Notes
Posted by Anne Percival Kruszka at 8:21 PM No comments: Links to this post

Rome, Jan 14 - Chauncey Percival died at 7:30 this evening at his home in West Rome, aged 74 years. He was born in Deerfield and when a child his parents moved to Annsville and there he lived till four years ago, when he moved to West Rome. Surviving are his wife and three children: Grove Percival, Mrs. James R. Dixon and Mrs. Edith Marvel, all of Rome also two brothers and one sister, George and William Percival and Mrs. Melissa McMullen of Camden. Deceased had always followed the occupation of a farmer. He was respected by all who knew him.

It Was a Wonderful Webinar

I attended Webinar Wednesday yesterday at Family Tree Webinars. Holy cow, I didn't know I could access my laptop via my Samsung 4 7.0 nook tablet using Splashtop remote desktop. I had quite the fun using it and using the touch screen technology of Windows 8 on my tablet. Since I also have a bluetooth keyboard, it's like working on a much smaller laptop. I even accessed Legacy Family tree software. It even worked great for printing a to-do list remotely.  Love it.

I am not too old to learn stuff!

Copyright 2010-2015, ACK for Gene Notes
Posted by Anne Percival Kruszka at 7:40 PM No comments: Links to this post

Of Crashes and Other Weird Things

Way back in February and March when I was laid up with the avulsion fracture to my right ankle, I got addicted to CNN. As a result, when there is a report of a plane crash, I automatically tune to CNN. Where else can you hear the same thing day after day, with nothing new to report?  Lately, I've been following the crash of the AirAsia flight that went down after Christmas.

I was surprised to see them run a documentary on plane crash survivors. Not just any survivors, but sole survivors. Since it aired last week, I was glued to the TV, especially the bits about then 4-year old Celia Cichan who was the sole survivor of flight 255 at Detroit Metro airport on August 16, 1987. It was very interesting.

Also, I read on Facebook that Little Jimmy Dickens died. DH and I saw him at the Grand Ole Opry back in November. He sure had a lot of energy for someone who was 93 at the time. And then later of the death of Donna Douglas, or as I knew her, Elly May Clampett.

It's weird just how fast life flies by. Every year is made up of events small and major that are part of the fabric of our lives. Do you record those things in your genealogy?

How many of you recall what you were doing in 1963 when Kennedy was assassinated? It's a major event that occurred in our lives (some of us anyway.) It's not recorded in my genealogy now, because I was 12 when it happened and maybe my memory is faulty about the day. Mostly, I remember the funeral. And of course on every major anniversary of that November day, the footage of the funeral is rolled out. So how much is true memory and how much is influenced by the replaying of the events?

Did our ancestors feel the same way on hearing of the death of George Washington? Or were they shocked by the assassination of Lincoln? I can almost put money on my Confederate ancestors not being shocked or saddened by Lincoln's death as a couple of them were quite disparaging when mentioning him.

Our ancestors didn't have the benefit of television before the 1940s, they relied on letters and newspapers and telegrams.

I often envied my mother's father. Born in 1888, he grew up when cars were new; saw the advent of the airplane and lived to see men on the moon. He was raised on a farm in East Tawas, Michigan and I am sure probably did not see or own a car of his own.

I've grown up with the space program, was an adult when computers and cell phones became normal extensions of our every day lives. Seen pictures from space and the Mars rover.

What new and wonderful things will our children and grandchildren see?

Jozef Harema was the husband of Jozefa Siekierski, my husband's great-great aunt.

For years, I've kept a log of how much I've accomplished on a monthly basis, genealogy wise. Mostly, those results translate into numbers. This is probably the slowest genealogy year I've had in the last 27 years of researching, but I discovered I did add 178 people to my database. And 60 items to my to do list. Of course, I've not removed any I researched in October in Lexington, Kentucky. Mainly, because I have not even done anything with the obits, marriages, and news items I culled from the Lexington Public Library's Kentucky room.

Probably the happiest stuff I found were some of the records for DH's hubby in Poland, where his maternal grandmother lived. I finally found her parent's marriage records and birth and/or death records for some of their children. That's a huge win in my eyes!

What a year 2014 was. Pretty much glad it is over. Last night we followed a tradition DH and I started a few years back where we basically snack through New Year's Eve, have a couple drinks and then sleep through the dropping of the ball -- or in Nashville's tradition the musical note!

On Christmas Eve, we finally got pictures of everyone. We had a great time getting them. I hope I keep up that tradition.

Copyright 2010-2014, ACK for Gene Notes
Posted by Anne Percival Kruszka at 8:16 AM No comments: Links to this post