What Season Is It, Anyway?

The long winter here in mid Tennessee finally gave way to a pleasant spring. Sixty and seventy degree days in March sure feel good. The problem is, it did not last. It started to rain and the temps dipped back into the forties with night time lows in the *shudder* twenties and thirties. Gah!

It did allow for some genealogy time, and I took advantage of it. I grabbed a pile of paper from my organizer - see here - and started entering information. You know how it is though, when you start something, and don't complete it right away. Sometimes you forget why the heck you did something or who the heck that person is on the Find-a-Grave site you were interested in last year! I have accomplished quite a bit though, and still working down that pile! I really hope Spring comes back soon because hubby and I are working on an outside project that really needs to get done before Easter! More on that sometime next week, I hope!

Copyright 2010-2015, ACK for Gene Notes
Posted by Anne Percival Kruszka at 5:37 PM No comments: Links to this post

I recently found a Union Provost Marshal's file on my great-great-great grandfather, Edwin H. Carter. If I had any doubts after reading the first deposition, the second sealed the deal that it was my g-g-g grandfather by  the name of his step-daughter, Carrie Burbridge.

E. H. Carter lived in Lexington, Missouri, and was a slave owner. Let me make it clear that I do not apologize for the fact that he owned slaves. I have absolutely no control over that fact. It's unfortunate that he owned slaves, but it bothers me that he wasn't very kind to them for the most part. Here are the unedited depositions.


Violet Young. (Colored), age forty eight years being duly sworn upon her oath states, I live in Lexington Lafayette Co. Mo. I formerly belonged to and lived with Edwin H. Carter. He is my old Master & for most of the time previous to last August for nearly eight years I have been hired out by Mr. Carter to different persons. I lived with James Hays two years of that time & with Dr. Frank Cooley, two years. I was living with him when I assumed my freedom. My old Master, Edwin H. Harter was never a very kind master to me, his wife was generally a kind mistress, his daughters were very cross and unkind to me & my children. His sons were on the contrary always kind and polite to me & to all the servants and to my children. I never heard my master, or any of his family make any threats agains Pleasants or any one of his former slaves in consequence of their leaving or having left him. Some of his negroes said he had, but I never heard any threats made myself. I have no reason to believe of my own knowledge that Mr. Carter or any of his family had any thing to do with or knowledge of Pleasants being shot previous to its taking place or that he or they had any connection with or knowledge of the persons who shot Ed Pleasants. This is all I have to say.


Ann Marshall (colored) age 18 years being duly sworn upon her Oath states I live in Lexington Lafayette Co Mo. at this time. I formerly belonged to and lived with Edwin H. Carter. I was raised in his family. Mr. Carter & his family alwas treated me and all of his colored people very well until I left his Daughter, with whom I was living in Shelby Co. Mo. last Christmas, and come here at that time. During Christmas Hollidays I went out Mr Carters house to see my old Grandmother who was then living at his house. And Mr. Carter asked me what I was doing out to his house? I told him I had come "to see m Grandmother. He then told me to "leave," that he did not want "Contraband niggers to come about his place"  Mr. Carter took from me a letter that had been written to me with my grandparents names signed to it & he would not let me have it again & he sent me word by one of his step daughters Miss Carrie Burbridge, he would keep that letter  & that I could not have it again. I am acquainted with Ed Pleasants who was lately wounded. He was formerly my fellow servant & belonged to Mr. Carter. (over)  I know nothing of my own knowledge personally about the cause of Ed's being wounded or of the persons who committed the act. I never heard Mr. Carter or any of his family make any threats against or to Ed Pleasants. As far as I know Mr. Carter & Ed always got along very well together while I was with them or living at Home. I believe Ed left Mr. Carter's during las Christmas Hollidays & has not to my knowledge been there since. I believe I have nothing further to state.

The other name I recognized was that of Dr. Frank Cooley. He was married to one of my Chinn relatives (Penelope Ellen Chinn was my great-great-grandmother's (Mary Elizabeth Bowman nee Chinn) sister.

I found this reference last week, and it is driving me kind of crazy. Why? Because my Bowman's lived in Lexington, Missouri in this time frame. It's the four generation thing. In my direct line, I can only account for three generations. However, it's possible that Joseph Bowman and his wife had grandchildren by then. Or Julia Bowman Weber (my great-great grandfather's cousin) may have had great grandchildren. And she lived in Kansas City, Missouri. Hmmmm. Or maybe the Mountjoy line (Isabella Bowman, my great grand aunt and my great grandfather's sister) had grandchildren by then.

A check of the 1900 Census shows my Bowman line as the only line there. I think I have a winner!

Thriller Thursday? Or What Happened to the Rest?

Don't get me wrong, I am happy to have the obituaries from the Michigan Obituaries, 1820-2006 on Family Search. It has helped me tremendously.  It has also confused me.

For example,  the following obituary for Richard C. Percival, an extremely distant relative, which was published when? Where? And what happened to the rest of it? Sometimes, when you go to the next image in the series, you might find the rest of the obituary. Not so in this case. What Funeral Home are they talking about? The cemetery was found on Find-a-Grave. How on earth do I cite this? 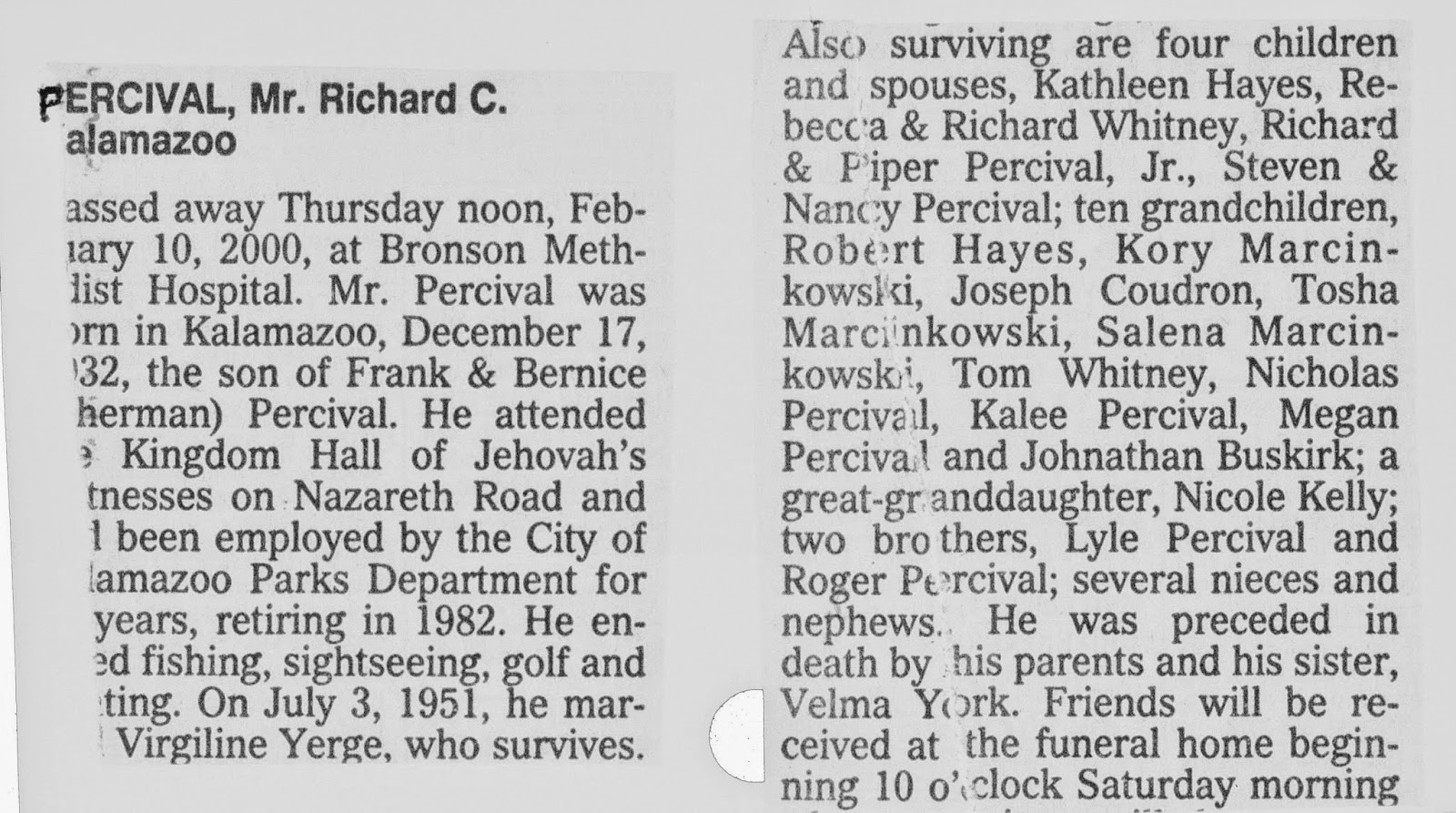 A long time ago I blogged about the headstone of my great-great Grandmother, Sarah Ann Kirtley Percival Webb, here. Mostly, I talked about the difficulty in finding the stone we walked past many times. All of us.

What I didn't say was that on that first visit, my family and I met distant relatives of Sarah Ann Kirtley's family, Linda and Buddy Grubbs. Living relatives. In a cemetery. Who knew?

These things happen all the time to everyone. I call it serendipity.

More From That War of 1812 Pension File

These records are filmed in no particular order. So consider my surprise when I found the following letter about my ancestor.

Joseph G. Chinn, to whom a Pension Certificate has been granted (which I returned for correction) under Act 14 Feby '71, is represented to me by some of the best loyal men of Kentucky, as being during the war, one of the bitterest enemies of the government, an open and avowed rebel, and so far as talk and moral support & encouragement could go he was one their strongest aiders and abettors.

I can send you affidavits of the best men in Kentucky substantiating these facts, and I thought it my duty to inform you of them and respectfully ask their consideration.

Men who were in the wear of 1812 were of course too old to go in the Rebel Army, if the loyal are to be separated from the disloyal, it seems to me that the universal opinion of the community that Chinn is or was a rebel and the proof of reliable loyal men as to his rebel sentiments & utterances is about the only way to determine his loyalty or disloyalty.

Suspend payment & request agent at Lexington, Ky. to submit affidavits which he says can be furnished.
O.W. & cc.

I'm surprised because his biography that appeared in the Biographical Encyclopedia of Kentucky tells a much different story about his allegiance. I think it important to inject here that in the late 1860's Dr. Chinn was actually mayor of Lexington, Kentucky.

I finally sat down and downloaded my great-great-great grandfather, Joseph G. Chinn's, War of 1812 Pension record. He enlisted at the age of 15 served three months and was sent home with a wound in the foot. Knowing medical conditions at the time, I suppose he is lucky to have retained said appendage.

In his records, I found this very nice 1887 letter from Josep Logan, Special Examiner for the Department of Interior Pension Office:

The pensioner is a grand looking old man; over 6 ft in height, rect. Says he is in perfect health, Age about 92. Well preserved in every way. Says he come of a consumptive family. That he commenced his practice of medicine at 20, done a large practice horseback for 56 or 60 years.

He has a beautiful home. His wife (3d one) is in her 99th year. Dr. Joseph G. Chinn is one of best known and highly respected citizens of Lexington, Ky 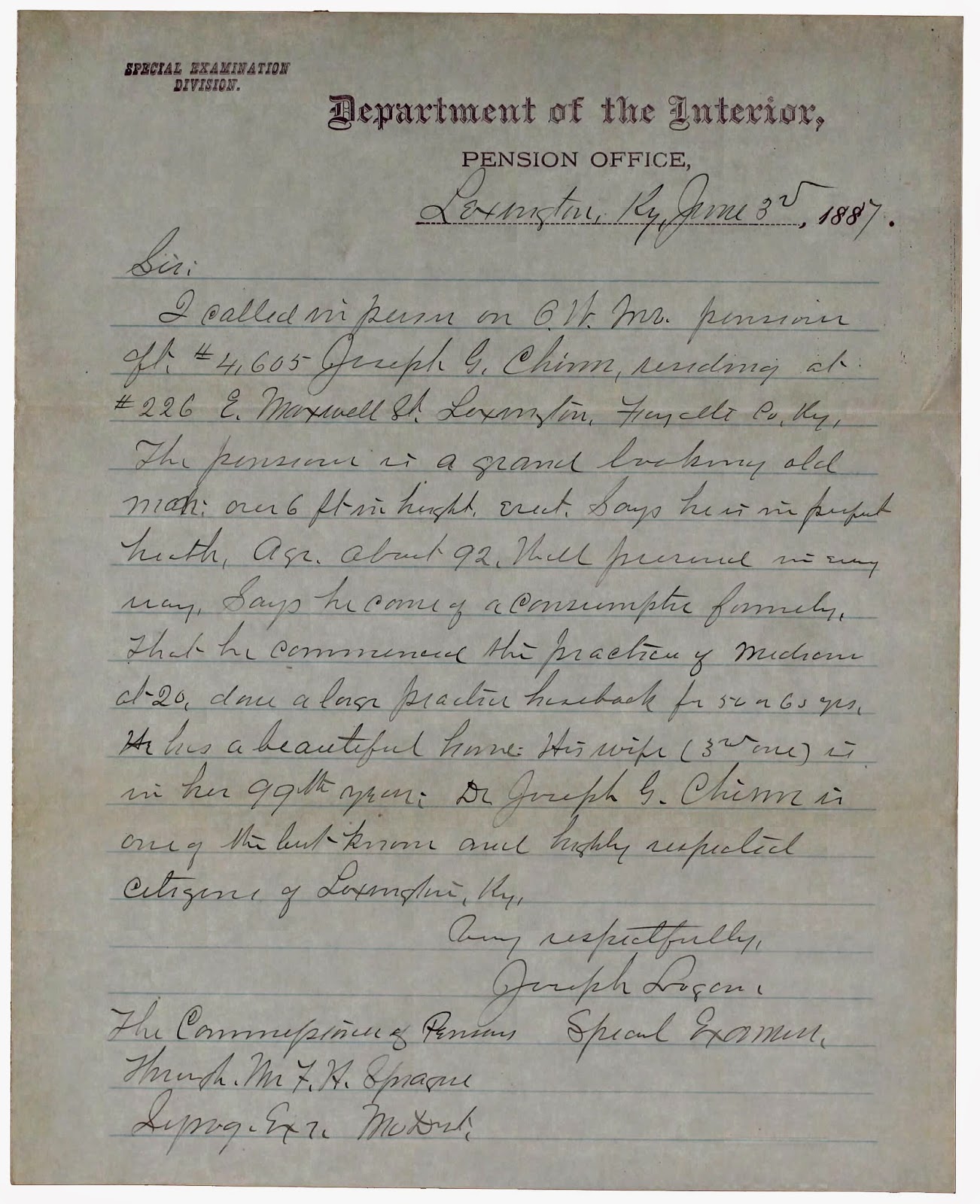 I received official word this afternoon that the 1964 Missouri Death Certificate indexing project was complete. In no time at all, they will have them up and running. Yay!