It's really nice to be able to find the marriage bond for your great-great-great-great grandparents, in this case Elijah Kirtley and Ann Bohannon. It would also be nice to actually see a marriage record. 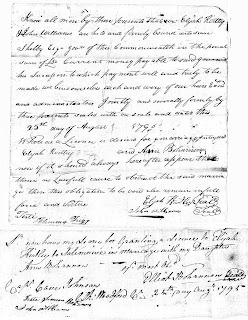 The last piece, on the bottom, included with the marriage bond is the permission from Ann's father, Elliot Bohannon.

On the Hunt for H. G. Percival

My great-great-great grandfather, Dr. John Percival was married twice. I can document 4 of his children. I believe there were 6.

By his first wife, Matilda Fleet Hinton Goodridge, family says, he had a son Egbert D. Percival and a daughter Elizabeth. By his second wife, Sarah Ann Kirtley, he supposed had John Stearns Percival, Jr.; Jabez, Eliza and William. I have no documentation for Elizabeth or William.

Egbert married Fannie Banks in Rising Sun, Ohio county, Indiana in 1848. By 1850, they are living in Memphis, Tennessee. In 1851, Fannie gives birth to a child, who dies October 3, 1851. They migrated to Placer county, California in 1852 via Nicaragua and Acapulco, Mexico and San Francisco aboard the Independence.

In 1860 Egbert, Fannie and son, HENRY (very clearly written) aged 1 year. In 1870, Fannie is head of household, Henry (again very clearly written) is 11, Fannie's mother Sarah Banks is living with them and Egbert is enumerated last. The household was enumerated in September of 1870. The 1870 census asks for all people living in the house on June 1, 1870. Egbert died June 11, 1870.

I found this death notice over the weekend.

I would just love to know how he went from being Henry Percival to Harvey Percival. I'm pretty sure this is my guy. I have a feeling if I ever do view his death certificate, the parents' names won't be listed.