When composing this and the previous Thriller Thursday posts, I did something I never do:  I let a relative see what I was going to post first.  Obviously, this relative okayed it. Then she dropped the news that Sonny's killer was currently in prison for another murder. As a follow-up, here is his "rap sheet." Note that he received 10 years for the March 1983 murder of Sonny McCarty, not 17 years, 210 days. Those were for other crimes - like grand larceny. The paper, The Newport News (VA) Daily Press corrected that in a later edition. 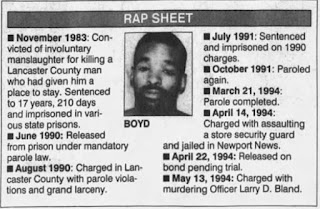 If that wasn't enough, while on trial for the murder of Police officer Larry Bland in 1994, he felt he shouldn't do any jail time. He is still in prison for this murder and still seeks parole. 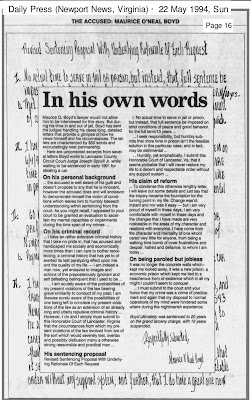 I don't often get a chance to write about recent deaths, i.e. deaths that took place in my lifetime or as in this case, 35 years ago. Sonny McCarty was my mom's first cousin once removed. He is survived by both his sisters and nieces, nephews, great-nieces and great-nephews.

Lancaster, A Lancaster County man who had been free on bond since Feb. 2 pending a hearing on a grand larceny charge was jailed yesterday in connection with the shooting death of the man who posted his bond.

Ovid Roy McCarty, Jr., 49, an employee of the Rappahannock Record, was shot and killed at his home in Ottoman early yesterday, Sheriff John H. Hammell said. Hammell said McCarty apparently died from a wound caused by a bullet fired from a small caliber pistol into the back of his head.

Maurice O'Neal Boyd, 18, of Nuttsville was arrested after McCarty's body was found by deputies. He was charged with murdering McCarty and is being held at the Lancaster jail in lieu of $80,000 cash bond, Hamell said.

A preliminary hearing on a grand larceny charge agains Boyd in connection with an automobile theft in Kilmarnock is scheduled for next Wednesday. Hammell said McCarty posted a $1,500 bond Feb. 2, and authorities released Boyd pending the hearing on that charge.

The sheriff said Boyd was arrested in Pennsylvania on the car theft charge.

Boyd came to the Sheriff's Department at 4 a.m. yesterday and said someone had been hurt in the Ottoman area, Hammell said, but provided no other details. At 7 a.m., Boyd returned and said McCarty was dead. Deputies investigating the report found the body, the sheriff said.

Boyd was charged with the killing. He also has been charged with one count of using a firearm in the commission of a felony.

Boyd was indicted on a charge of 3rd degree murder in April, but a Circuit Court jury found him guilty of involuntary manslaughter and recommended a 10-year sentence, the maximum allowed.

McCarty, 49, was found shot to death in his home at Ottoman after Boyd turned himself in several hours later and told police he had shot the victim. Boyd testified at his trial that he was "playing a prank" on McCarty by aiming a .22 caliber rifle at the back of his head.

He said he pulled the trigger, thinking the gun was unloaded. McCarty died from the gunshot wound to the back of the head.

During the trial Commonwealth's Attorney Philip P. Purrington argued that McCarty and Boyd had quarreled before the shooting. He contended that Boyd, 18, would have called an ambulance immediately had the shooting been an accident, instead of waiting to contact authorities.