Since my DH's off-the-wall results from Ancestry's DNA test, I decided to test our daughters. While waiting, I am still trying to find any connection at all on my husband's line to his "matches." This is difficult since he has no ancestor matches at all. He does, however, have 165 "fourth cousins or closer."

Yeah, right. Most of his so-called matches have not associated a tree with their DNA. Others have two or three people in their tree; quite a few have "locked" them; many have basically done a single surname study or done only their male line.

To these people I want to say: "Ancestry's DNA test is autosomal. It's testing both your parents.  If your Jewish Ancestry comes from Europe, check Hitler's 1939 census.

Ancestry.com: It would be nice if you put a place for our notes in our own trees. Such as, "I am adopted, please help!" Or "My parents were left orphans in the Holocaust/WWII, please help me find my ancestors." Or, "Gee, my husband's DNA came out 46% European Jew and I've not found any of this in my research."

The really weird thing? One of my DH's "matches" had a surname in their tree of Klevesas. Dang, that is close to one in my tree - Klevesaat. Also in comparison to his "matches" I only have 114, but I do have 54 ancestor matches, (the little leaf next to a match on the DNA matches page.)

I have long been puzzled by my great granduncle, Dr. Herbert Davidson Percival. Periodically, I will look for more information on him. Last I knew he headed for Hawaii (in the 1890s) and never heard from again. Oh, and he deserted his wife, she married his cousin, Dr. William Percival.

More info found yesterday - and I can't even begin to explain this. Apparently he never took the medical boards in California? 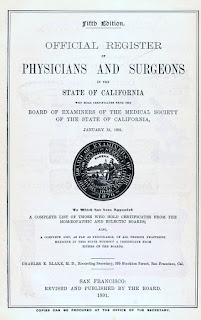 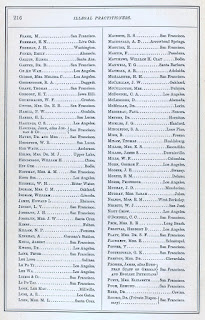 Me and HIS DNA!

So yesterday I mentioned that DH's DNA knocked me for a loop. As you can see, and if you know me and the fact that I have researched all but his mother's father's ancestors, you will see by the 46% European Jewish that I was STUNNED. I'm not saying there was never any Jewish ancestry, but the fact that it got passed down as strongly as it did just blows me away. I'm also saying I have no evidence of this. Oh dear.

With my DNA results I got a lot of EXTREMELY HIGH Confidence level in my matches and lots of hints. NO hints whatsoever, and only a few Extremely High Confidence levels in his matches. The people who do have trees share no surnames and most of his matches do not have any trees linked at all.

MY wonderful DH is an only child, so testing a sibling is out of the question. The cousins that I know of that had their DNA tested had Family Tree DNA, in the form of mTDNA and Y chromosome DNA, so at best they could be inconclusive. He has three cousins on his mother's side and five on his dad's side. What's next? Maybe DNA testing of our daughters to see what Mom & Dad passed down to them.

Me and My DNA

It's been a really busy summer. Daughter & The Man and boy are now in their new home. Getting that all together really took most of the hot, hot summer. Glad its over.

In the middle of August, I sent in DNA samples to Ancestry to test autosomal DNA for my DH and me. My results came back pretty much how I expected: here. Basically, I am 100% European. I have no idea if any of my siblings have had their DNA done, but since there are six of us, I am sure we can have widely varying results. Perhaps one of them got more of the Irish gene than I did!

Most of my hints have been right on in shared ancestors. The reason I say most? Not every one has a tree linked to their DNA and some have locked theirs.

Both my parents have German ancestry. My father's comes from his Bowman line - should read Baumann. My mother's side were Knost, Kettler, Kleesaat, and Meyer. The Zimmeths were Alsatian. My dad was mostly Great Britain with England, Scotland and Wales.

My DNA has been fun. My DH's knocked me for a loop!