Meet Champ! We adopted him on April 9, 2017.  Champ is a two year old mixed breed, that we adopted from A.A.R.F. (All About Rescue and Fixin') of Cookeville. He is 33 pounds of wonderful. When we adopted him, they thought he was part Manchester Terrier and Beagle. They were wrong. I had his DNA taken.

Yes, they really do DNA tests on dogs. I went with Wisdom Panel 3.0 and had the results in less than 2 weeks. Yes, my dog has a pie chart. His results were as surprising as my husband's. I was not surprised by the 50% mixed breed groups. We already knew he was a mutt. However, the 50% that wasn't indeterminate mixed breeds, showed he was 12.5 % each of Labrador Retriever, Miniature Pinscher which explains his coloring, Miniature Schnauzer, and Yorkshire Terrier.

Fortunately, his personality is Labrador. He is very sweet and biddable. His really bad habit is killing squirrels. He's gotten two, and pulled the tail off another. We put a cowbell on an extra collar, which he now wears in the backyard until we train that squirrel thing out of him. 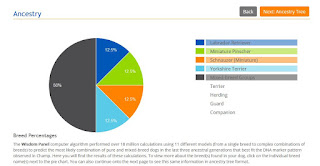 And Now It's the End of May

I can't believe it's the end of May already. Spring has been unusually hectic around here. I'm not complaining because it includes aesthetic changes to our kitchen, a new screen room in our backyard that encompasses our hot tub, we've been working on putting lattice around the deck, and oh yeah, we adopted a dog. More on the dog in a follow-up.

Also, I was contacted by someone who happens to share one of my husband's ancestors surname - Paluch. That too will be followed-up.

Then I added a Percival Family Research group on Facebook. If you are researching Percival, visit the page and ask to join. And yes, the Percival-L list on rootsweb.com still exists.

I've also been working on my Maitland line, and that will be a follow-up post too. This is something that has been in the works for about 6 years.

Is that enough in the way of teasers?