My four times great grandfather Elijah Kirtley built this beauty in 1830. Unfortunately, Elijah died in 1835. The home is in the Boone County Historic District. If you have family connections there, you need to check out the Boone County Public Library Local History & Genealogy! Photo is circa 1976.

Last night I attended a Legacy Family Tree Webinar on Analyzing Documents Sparks Ideas for Further Research. It was awesome. It was given by Angela Packer McGhie, CG.

One of the documents she used was a war of 1812 pension application. I had a few of those, and for the heck of it, went on Fold3 and looked up one of my surnames, Chinn.

The William B. Chinn or William Chinn as he is sometimes seen as in records married twice and this is where it gets tricky. His first wife was Lucy Corbin or Corban. His second wife was Lucy Kemper. The only date I had for William's death was 1872. Second wife, Lucy Kemper Chinn supplied that information on her application for widow's benefits.  She also states the first wife's name, and an approximation of the date of first wife's death.

My friend and fellow researcher Carol (Reflections from the Fence) has a saying about when you hit a brick wall: Review. Review. Review. I had not seen nor saved this pension application before. It's many pages long. And well worth reviewing.

Copyright 2010-2017, ACK for Gene Notes
Posted by Anne Percival Kruszka at 4:33 PM No comments: Links to this post

It's been hot here and dry. I get to cool off frequently in the above ground pool. It really helps. Then I am in a good cool mood to work on transferring files from Windows to Mac and continue to familiarize myself with how the Mac works.

It really amazes me how fast it is. No muss, no fuss, no crappy Windows 10 updates. My DH commented on how he never hears me swearing in my office. Mainly because the Mac doesn't restart while I'm in the middle of something else.

I'm scheduled to watch a webinar tonight. Curious to see how that goes!

Copyright 2010-2017, ACK for Gene Notes
Posted by Anne Percival Kruszka at 9:48 AM No comments: Links to this post

I keep many to-do lists. Most of them are genealogical in nature, but some have to do with life and/or computers.

Recently I switched to a MacBook Pro after using a windows computer since 1987. That's right, thirty years of using and swearing at my Microsoft compatible computers is over. For the most part. I still have some files to transfer.

One of the issues is compatibility. I lost a couple programs I have used for years -- GenSmarts. It was a lovely program that helped me search for records across many different databases and filled in a lot of holes. Another was Transcript. I used that for transcribing records, especially newspaper articles. I have found a couple workarounds for it and will just hope someone comes up with something that's Mac compatible.

Yesterday, I reformatted my little Western Digital Passport Ultra (1T) external hard drive so that I can use it in both my old laptop and the new one. That meant I had to go through tons of files on the hard drive to make sure I had all the files transferred. Since I used this for a backup by manually copying from laptop to external drive, there were only a few that I didn't have. The scary part was actually erasing and reformatting. Thought I would have a heart attack the first time because it failed. It didn't erase or reformat. The second time it worked when I followed the sparse directions a little closer. It felt really good to be able to back up my genealogical database - including photos - to something other than a thumb drive.

This morning, after receiving an answer from Flip-Pal, I installed the software for my little eye-fi card for the Flip-Pal and tested that. Then I hooked up my portable printer and hoped for the best. And that is what I got. I am so impressed with this MacBook. Not that things don't work a little differently, but I am adjusting. For kicks, I hooked up my wireless Microsoft mouse to see if it would work. It did. However, I love the touchpad on this so much, I've given up the mouse again. I've felt that a mouse just takes up space on my small and cluttered desk. This way, I have a little more room to spread out.

I am making progress slowly. Most of my time on it is learning all the ins and outs of using a MacBook. I even picked up a book that has been most helpful in finding out what works and what doesn't. I found one of the best ways to see how things work is to enter data in my genealogy database. I consider RootsMagic one of the most important software programs on my Mac. Even though it is not a "true" Mac app, it works pretty darn well. Full Mac compatibility is coming soon, I am told.

In the meantime, I will continue to run through my checklist of apps, files and wish list items and finish this Windows to Mac conversion.

So Many Third Cousins - Who the Heck Are They?

On my AncestryDNA page, I have six 3rd cousins showing. One I know for sure, the one of which I've blacked out her picture. The others? For the most part no idea. If the star is not gray? I've got an idea. The big problem? No trees. Except for the last one, but not enough info there to say yea or nay.

People, if you are going to the trouble to spend dollars on your DNA, link a tree to it. That's how you get those little leaves that tell you that you have a common ancestor. 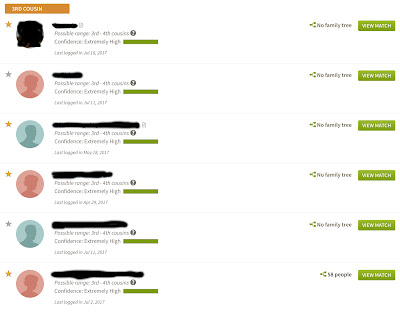 I don't know about you, but I don't like not knowing who these people are.

Thomas MacEntee is a wizard. Of that I am convinced. He manages to find or arrange great deals on genealogical type things. Yesterday, he passed on some great deals on DNA testing and a free kindle or pdf copy of his Genealogy Do-Over Workbook through Amazon. Hubs and I actually took advantage of the 23andMe $49 special to test with them. With his weird results, I am wondering what results 23andMe will show.

In regards to the book, I figure I will read it. I am not ready to start over, but there are some holes, I would love to fill in, some brick walls I would like to knock over and questions I would love answered, and anything that helps is a bonus! Copyright 2010-2017, ACK for Gene Notes
Posted by Anne Percival Kruszka at 9:35 AM No comments: Links to this post

I Hope He Was Left Handed

"Mr. Alexander Maitland, brother of George Maitland, of this city, lost the first joint of the index finger of his right hand a few days since, in a corn-sheller, over in the state of Ray, where he resides."

Posted by Anne Percival Kruszka at 12:00 AM No comments: Links to this post

What Did She Learn at Her Mother's Knee?

I am reasonably sure that the Mrs. Alex Maitland referred to in this news item was Mary Grieves Oliphant Maitland, my great-great grandmother. The year is certainly correct as Mary was married to Alex Maitland on March 4, 1865. By 1872, she had borne 4 children, so she must have been one busy lady! It's nice to know that your ancestor was competent at a time with few of the amenities we have today. 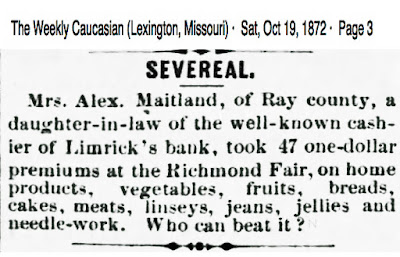 Posted by Anne Percival Kruszka at 12:00 AM No comments: Links to this post

Sometimes, well most times, I wonder about people indexing newspapers and such. The results can be pretty crazy. At times like this, for obits I browse the newspapers around the date of death. Sometimes it works. I was therefore confused when a search for Helen Maitland (I was searching for her mother) produced the following result. No, it's not an obituary, but about a cash gift given to the Episcopal Church in memory of his wife. You have to wonder why that showed up instead of the death notice. Especially, since this gift was eight years after her death. 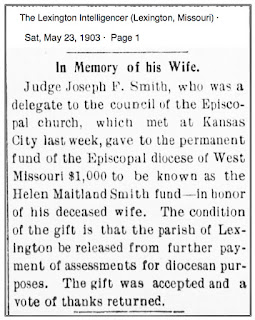 Well, that was curious so I went looking for her obituary. I did not expect to find that she died in Colorado. At the age of 45. I only found it because I went browsing by date. I was not so lucky with her sister or her father. 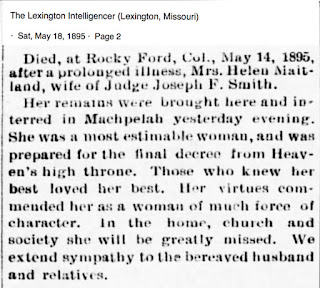 Yes, it can be expensive to have subscriptions to sites like Newspapers.com and Genealogy Bank, but it's easier and cheaper than traveling around the country looking for newspapers. Or trying to get them on interlibrary loan. 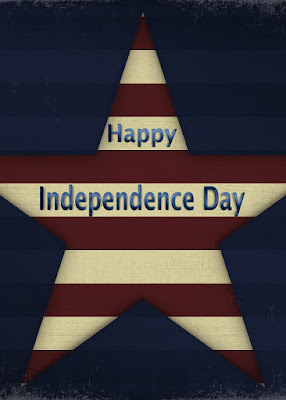 The Same Man or Wrong Men?

I found these on Ancestry last weekend. I am on the fence whether or not they belong to the same man or different men. Now, I do have two Alexander Maitlands, father and son. One lived in Lexington, Missouri for a while and the other settled in Richmond, Missouri. The latter was the son of the first. Now you may notice that the first one owes his allegiance to Scotland. Alex Maitland, Sr was born in 1813 in Scotland. His son was born in Canada in 1839. So, I'm not sure if The first record belongs to any of my Maitland's, but reasonably sure the second one does. Just not sure which Alexander Maitland. This certain needs some work. 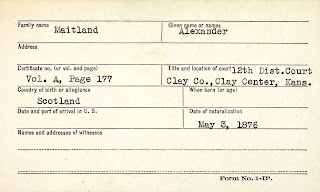 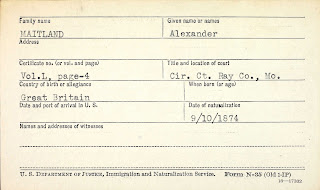 A friend of mine did an informal survey on Facebook about favorite Apps and/or websites. RootsMagic has long been my favorite App, even the year and a half I used a different genealogy software. This week, however, my favorite website is Newspapers.com.  I found that wonderful gem about my Maitland progenitors in yesterdays post. Today, I am sharing an obituary of my great great great grandmother Helen Maitland nee Skirving. This actually corrected a death date that I had. I don't know if I made the error or if the person from whom I received the information did. It's corrected now and that is all that matters. I love that she was born near Edenburg, Scotland. That should read Edinburgh (pronounced Edin-burrough to all you non Scots. Most of the rest of the information is more or less correct. What it doesn't tell you is that they emigrated to Canada in 1833, and they were there just a few months when her father fell down a well and died. She married Alexander Maitland, who indeed survived her, although I haven't discovered his obituary yet. I will. 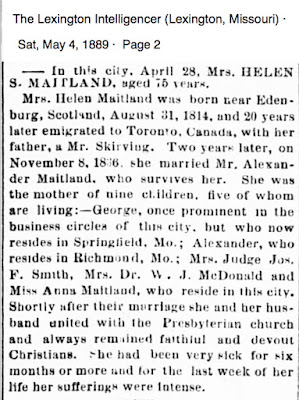