COVID-19 GO AWAY! I WANT TO GO TO A FAMILY HISTORY CENTER!

I really need to go to an LDS Family History Center. We have one in my little 'Ville that is only about 1 mile away. Due to COVID-19, it's closed. That's really sad because I need to look at some German Lutheran Church records that are not on Ancestry.
Last weekend was RootsTech 2021. I was able to snag a couple of Research strategy sessions to help with two of my brick walls. The first was Nathaniel Davidson, my g-g-g grandfather who was born in Kentucky in 1797. I have two records that tell me his year (approximate) of birth. The first is the 1850 census, in which he states he is 53 years old. The second is his marriage record (1828) that says he is 31. Finding two records that old that agree is amazing. I've been looking at land records and wills and probates in Howard County, Missouri where Nathaniel lived probably until 1833-ish. That's when he sold off his property there and moved to Lafayette County, Missouri with his wife, Ann Estes. She was from Lafayette County. In 1850, they are living near her mother. Nathaniel died intestate. He had one daughter who was a minor, so she is mentioned in probate records. He had three other daughters, Mary, Eliza and Susan (my ancestor), and a son, John.
In 1830, in Howard County, Missouri, Nathaniel has an older couple living with them. A male between the ages of 70-79 and a woman between 60-69. I think those could be his father and mother. We think his father was still alive in 1833, due to a family letter. So I am no really any further ahead. Missouri records are bad enough, the time period is awful and I can't find enough information in local newspapers.
The other family is on my mom's side, the Kleesaat's. Or maybe Kleesaat, Klesat, Clesotte, Clesot, Glissant and a new one - Klewsaat. I was able to find some stuff on ancestry relating to my ancestor Christian Heinrich Ludwig Kleesaat's sister, Catarina Johanna Friederike Kleesaat. She was born in 1816 - two years younger than Christian. She married a first cousin, Jurgen Friederich Carl Klewsaat. They had 9, maybe 10 children. I think somewhere along the line when they were flipping her name around in the church records it ended up being Friederike Johanna Catarina. Then I found Jurgen and Friederika Johanna Christina. Jurgen died in 1867 and in 1867, Friederika appears with a couple of their children in the Mecklenburg-Schwerin census. But I really need to get into the Family History Center to look at the records in the surrounding towns to see if I can find a marriage record and baptismal records for my direct line. They have the records.  This is what I get, and I have to access at a Family History Center.
I'm waiting. 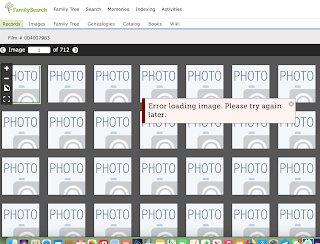