Heaven only knows why I waited so long to buy a MacBook. Oh wait, I waited because my genealogy program had to run on Mac without running parallels or some other way of running it. I bought it when I did because RootsMagic made a version (6) that would run on crossover. Now I am into version 7 and testing version 8 which is a native Mac version.
There are however two program I really miss. Transcript, which I fell in love with it instantly, and which I reviewed in 2012 and GenSmarts which I started using in 2011. Unfortunately neither are Mac compatible, and GenSmarts told me that it probably never would produce a Mac Version. Sigh. 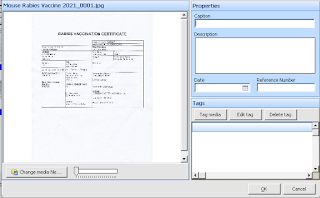 In RootsMagic 7 I can use the add media screen to transcribe, that is not possible in RM8, so far, which means I'll be transcribing in RM7 for the time being unless I find a decent app.
I used windows computers for years. I hated them. My Mac has been wonderfully trouble free. Ahhh.
Copyright 2010-2021, ACK for Gene Notes
Posted by Anne Percival Kruszka at 2:39 PM