The other day I wrote about going to Lexington Cemetery. What I didn't say was I look like a drunk lurching around the headstones. I really try to walk carefully, being terrified of tripping over a lot marker or stepping in a shallow hole. I will do anything not to wrench my right knee - the titanium one!

I looked at my pictures from the cemetery and as I suspected the text on the memorial for John B. Bowman were awful. I just couldn't get close enough - it was way too high. However, since Wednesday's plan was to hit the Kentucky Room, I searched for and found the inscription in the Lexington Herald, November 13, 1914.

"Nature might stand up
and say to all the world
'this was a man.'

John Bryan Bowman
who, in 1858, revived
Bacon College
under the name of
Kentucky University
and, in 1865,
multiplied its one college
united with that institution
which name was resumed in 1908
and the
Agricultural and Mechanical College
of Kentucky
which in 1908 became the
State University of Kentucky
and received the official title of
Regent of Kentucky University
which office he filled until 1878.
He, in 1866
purchased for the site of the university the
Ashland and Woodland Estates
and in 1870
became by an act of the Legislature,
originator of the
Lexington Street Railway,
which the
Interurban Railway naturally
followed.
He was indirectly the cause,
in 1869, of Hocker, now Hamilton
College,
in 1876 the Commercial College, and
in 1877, the College of the Bible
Born and died in Mercer County
October 16, 1824, September 19, 1891.
His Wife
Mary Dorcas Bowman
Born in North Middletown, August 26, 1826." 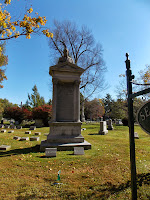 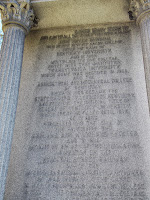 Apparently, no one really cared to inscribe Mary Bowman's death date, which was about a year and half later on March 11, 1916.