My mother's uncle George Zimmeth (he died in 1918 before her parents were married) was married to Julia Blust. After George's death Julia remarried to William McLinden (or McLindon) depending on the record you look at.  I knew from church records that Julia died December 9, 1925.

I finally found her Sunday, by searching not on Ancestry.com but SeekingMichigan.com. Great site. But her death record left me confused. You see, it had her name as Mary June McLinden, daughter of Joseph Blust and Barbara Berger.

So, why does her death record refer to her as Mary June? Maybe an error in transcription from the death record to the certificate?

I always thought that Julia died from being pregnant too much. I found evidence of 12 children. Three lived to be adults. And indeed, Julia had a miscarriage and a D&C on November 30, 1925. But not according to her death certificate. She died of ptomaine poisoning from chicken soup prepared at home. I don't buy it. 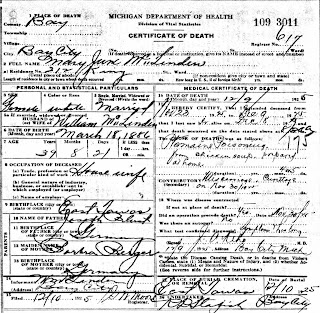