Our Thanksgiving celebrations have been our own brand of traditional since we moved to Tennessee. For the last several years, it's been pretty routine. And it's a mix of Thanksgiving and Christmas. 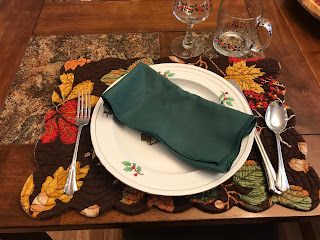 Thanksgiving is the day I break out the Christmas dishes. I always say we are going to use them until New Year's day. That doesn't usually happen. With just the four of us (hubby, older daughter & younger daughter) usually after the dishwasher runs, the plates get put away.

This year we had turkey, dressing (my mom's recipe) green bean casserole, baked beans, mashed sweet potatoes and crescent rolls. My mom's dressing (or stuffing) was always made in great quantities at our house when I was a kid. Sometimes mine approaches the stuffing my mom made. Other times, it's ok. This year, I added the napkins my mother-in-law gave me. They came from the bar that they owned in the 1950s - Lefty's Sportsman's Bar on Warren and Livernois in Detroit. I suspect my mother-in-law made them. Hubby did a fine job of carving the turkey and with a lot less noise on his part.

Another tradition in our family was usually my dad getting sick around a holiday. Later, hubby's mother gained that dubious honor. This year, our dog required an emergency trip to the vet. We're still not sure what made him sick, since he ate no people food. A full 24 hours later and he is starting to bounce back to his normal self.

Our final tradition is whatever turkey is left over after Black Friday becomes turkey pot pies. One will be shared with our daughters the day I put them together. The other one usually becomes Christmas Eve dinner.