Not My Polish Roots 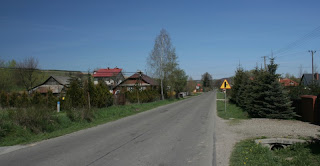 Cousin Carol at Reflections from the Fence had a post last week in relation to the Carnival of Eastern Europe Genealogy which inspired me to look into a some of my families, one is Zabrack (yesterday's blog) and the other thing was to look for Borek Nowy near Rszezow in Poland which is the home of DH's late grandmother,Wiktarya Synos and which is pictured here. Borek Nowy, not Grandma (photo from Wikimedia.) It says Borek Nowy on her Birth record, but actually when you look for it now you will find it under Nowy Borek. I can't help but wonder what changes this little village has seen since she left it in 1907. DH's grandmother met her husband Andrzej Zalot in Greenfield, Massachusetts and they were married in Montague, Massachusetts in 1912. By 1920, they had made their way to the Detroit area. Grandma never gave up her Polish, hoping some day to return to Poland. She spoke some English, but by the time I met her she had been living in a nursing home for a few years and had totally regressed to Polish.

There were times when my late mother-in-law and I talked about someday making the trip there, but that dream went with her. But I had to show DH this street view of his grandma's village. I think he filed it under "that was pretty cool."