My earliest Davidson ancestor that I can trace to is Nathaniel Davidson, born in Kentucky, circa 1797 and died in Lafayette County, Missouri, April 10, 1854. He married Ann(e) or Hannah Eastes (Estes) July 29, 1828 in Lafayette county, Missouri.  Nathaniel is also my brick wall as I can not trace him back further.

I do have an intriguing letter written by a John Davidson in 1833 to his father. Nathaniel Davidson did have a son, John, born about 1830. Could the writer of this letter be Nathaniel's brother or maybe even his own father?

This is a transcription of the letter:


Oh My dear father,
What shall I say to you in answer to your letter under date of 28th June last, in which you detaild the last hours and death of my very aged and Mother. My father how it strikes my heart strings to when I look back and see when youth bloomd in her face, now your with my father never to Return. But Oh My Father you know that I know her exemplary life is rewarded in the world beyond the poor. I feel proud that I have the heart of such a parent to write such a letter as your last that was able to give such a minute account of One on the very verge of Heaven, why my Father will you mourn her loss, look at your age, few such cases in your knowledge, see how long her life was lengthened out as a partner of your Cares & joys in life, and you have no kind of doubt of her piety. Therefore hope you will in your next Say to me. The Lord giveth and taketh and Blessed Is his name. I Blush at the Idea of dictating to you, on any moral subject.


I wrote you sometime in June last and stated my health was somewhat delicate. Thank God I am in good health and have been for some time. My daughter I am truly uneasy about have Recd. no letter from R since 18th June. She went on a visit in March last to Orleans have not see her since. I have said much On the subject of visiting you that I will say no more until you do. Heaven protect my aged Father until we meet. 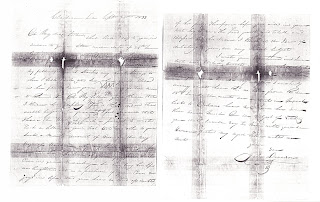 Here is a scanned photocopy of the original letter. You can see that someone attempted to tape it together, which made the original photocopy dark in areas. If you click on it you might be able to read the original.

So for now, Nathaniel Davidson sits there on my brick wall list.

Copyright 2010, ACK for Gene Notes
Posted by Anne Percival Kruszka at 12:01 AM