Of all the records available to family researchers, vital records are my favorites. Especially free vital records.One of the reasons, I like them is they can give some great information.

One of the things I highlight when I am entering information into my genealogy program is where the person lived when he died and are there vital records online that I can search. Also, obituaries, where available are such a great resource since they often list other family members, ancestors, occupations, church affiliations and birth, death and burial places.

So I was really pleased when a search of Kentucky death records online at Ancestry.com yielded a death certificate in Kentucky for Joseph Chambers. Since the Chambers/Tousey lines was one I was working on, I pulled this record, just checking the year to see if it was feasible. It was. The puzzling thing was the place of death: Cincinnati, Ohio! On a Kentucky death record.  Okay, this is not that unusual, as some states require a death certificate for burial, and you will often find a derivative in the Kentucky records. A check of the Ohio Death Certificates (1908-1953) on the Family Search Record Search Site would hopefully yield the "official" death certificate. 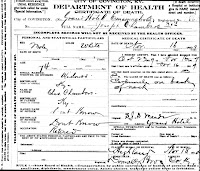 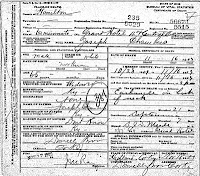 Well, I'd like to say that it proved everything I thought. But alas, it opened a can of worms. While the date of death and burial and the cause of death were all the same, the only other items that were identical were the place of death - Grand Hotel, Cincinnati, Ohio and the cause of death. There were nine years difference in the age, and Ohio had his father's name as Joseph and Kentucky had his father's name as Charles!

This is where census work comes in. The 1900 census for Cincinnati, Ohio at the Grand Hotel, clearly shows Joseph Chambers, birth date Mar 1834, born in Kentucky, parents born in Kentucky.  The 1880 census shows him enumerated with his wife, Elvira and son Vactor, along with his mother-in-law Elvira Gaines and he is 46 years old - birth year 1834 in Kentucky. I found him only becauses his wife was indexed with him. He was indexed as Jas. instead of Jos.The 1870 and 1860 census are still consistent with that 1834 birth date and children. The 1860 census shows him with his wife and his household is enumerated after that of one Charles Chambers age 58 and Joseph is still born circa 1834. Finally a check of the 1850 census has him enumerated  with his father and brother and birth year is still circa 1834.

I don't need any more proof to conclude that the death certificates are for the same person, but am glad that I found two conflicting death certificates. It is a prime example that even "official records" can be wrong. I will admit that if I had found the Ohio record first, I would have dismissed it. But having seen the Kentucky one, I now see the errors on the Ohio record. And I found this because I have obsessive-compulsive family research disorder!

* Clicking on the images will display a full scale photo.
Posted by Anne Percival Kruszka at 12:01 AM