Loriman Samuel Percival Who Are You?

In yesterday's blog post, I indicated I had possibly found a family member while randomly searching on Ancestry in their "Report of the Death of An American Citizen" database recently. I came across a death record for one Loriman Samuel Percival. Curious. While I do have a Loriman Brigham Percival, born in 1884 to Samuel M. Percival & Druscilla Snow Percival*, I only have a census from 1910 that shows Loriman B. Percival married to Inez. Inez proved to be Inez C. Mattison and they were married in 1905 in Washington. After 1910, Loriman B. Percival, or L. B. Percival is difficult to find. In 1910, he is listed as a salesman, but the majority of the articles I find on him list him as an actor. I have looked for a death notice/record of him for some time now, without much luck. I need something to prove that Loriman Samuel Percival is his son.

One more look at the newspapers on Ancestry showed something I hadn't seen before. Could this be the article I hoped to find?

It certainly did prove several things. First, it proved Loriman B. Percival mentioned was the correct Loriman Percival. Even though they got his mother's first name wrong. Dinsilla? Really? Spouse was Viola (Shaw). And his son -- Loriman S. Percival. I love it when things work out they way I think they should! I am so glad I kept looking for this record, because the name kept making me think they were father and son, but I needed the proof. 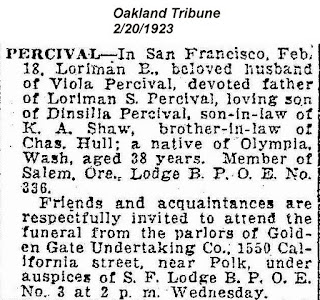